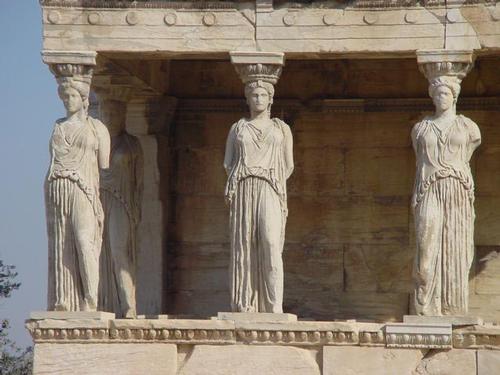 In Greek Acropolis means „upper town“or „ highest town“. In ancient Greece human habitats were built so that any potential invaders were visible from afar, and their reach the gates of the city was the most difficult.
The most famous Acropolis in the world is that of Athens. The first traces of settlement on the hill, which is 90 meters high, come from the Neolithic period, ie from the end of the Stone Age. The oldest curtains ever discovered, according to archaeologists, come from the tenth century BC. In the first half of the sixth century BC the first temple called Hekatompedon was built there and in the same century, around 560 BC, Pizystrat, Athenian tyrant built a monumental gateway – Propylaea and expanded the already existing temple.

During the invasion of the Persians in 480 BC, all the buildings on the hill were destroyed. Another temple was built after three years on the initiative of Pericles – great Athenian politician and promoter of democracy. This temple is standing to this day, the Parthenon. The building was erected in honor of the goddess of wisdom and fair war, Athena, patroness of the city. The architectural style in which the Parthenon was designed is Doric order, characterized by monumentality, severity and functionality. The Parthenon is located in the center of the Acropolis, and the material of which it was made is white marble. Sculptures and statuaries (including a bronze statue of Athena) are the work of Phidias, which is considered the greatest classical Greek artist.

The temple has a shape of rectangle surrounded by 46 columns, on the which decorative cornice was placed. Because of that the Parthenon was made of expensive material and there were precious artifacts in it, it was being gradually stolen away. Nor did the next war spare it. Its present appearance is mainly just the great columns (in the USA, in Nashville, there is a replica of the Athenian work).

In the 438 BC, construction of Propylei was started, partly on the ruins of the one from Pizystrata era. The architect was Mnesikles. The whole was composed of large and small gate, to the main building led stairs, and on its facades, there were six columns. The northern part was dedicated for the gallery, and at the end of the southern side the temple of Athena Nike was built. Propylaea waw never finally finished because of the wars. Mainly, columns and several walls have preserved.

Another temple on the Acropolis appeared in 406 BC and was built in honor of Erechteus (the first king of Athens), and it was dedicated to Poseidon and Athena. It had two levels and represented the Ionic order so its design was thin and light with rich decorations. The entire temple consisted of three buildings with separate entrances but each part was connected with one another. The most interesting remain of a temple Erechteyon is portico with caryatids – a rectangular building adjacent to the main building, which roof rests on the decorative columns, depicting the silhouettes of women.

In 27 AD, the Romans built temple dedicated to Roma and Augustus, which violated the classic look of the hill. It was a circular building with a diameter of 11 meters without walls and ceiling based only on the columns. It is the last known building built on the Acropolis. In the following years Parthenon was transformed into a Christian church or a mosque by invaders from Turkey, whose presence on the hill and their attempts to take it over had deplorable effect on development. In 1834, archaeological excavations were started on the site, and since 1975 restoration work has been in progress.