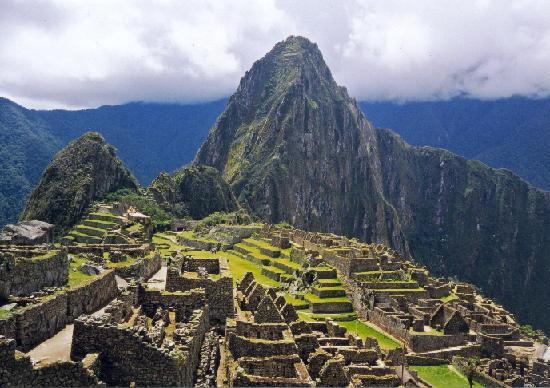 Machu Picchu means „old peak“. It is located on the present territory of Peru. This city of the Incas is in the Andes at an altitude of 2,090 to 2,400 meters above sea level and is the best preserved complex of the buildings left by the empire.

Incas founded their state in twelfth century and for the next four hundred years captured almost the entire western part of South America. Incas were mainly engaged with agriculture, cattle bredding and mining, they mined copper and silver. Despite the difficult conditions for the farming beacuse of the lay of the land, they produced a lot of food. Their fields were located on the ledges and were irrigated by the water drainages made by them. They were good designers and builders. Their houses were built of stone combined with clay. They were self-sufficient, had a well-organized administration and were great astronomers. Before the Spanish colonizers appeared on the main land they had led numerous civil wars, which made Europeans invasion simple.

City of Machu Picchu is a perfect example of the genius of the Incas and level of their civilization developement. It is estimated that the city began to emerge in the fifteenth century, and it emptied at the end of the sixteenth century, in 1572.

The reasons for emigration of its inhabitants are unknown. It might have something to do with their beliefs or perhaps with the fear of the Spaniards and infectious diseases which they had brought.

For a hundred years several palaces , public buildings, temples, houses and all the infrastructure came into being- mainly the irrigating and draining system, because at this altitude and latitude there is dry and rainy season. The Spaniards never reached the city. Discovery of Machu Picchu was to happen no sooner then in 1911.

Buildings there are located in such way that they are not visible from the lower parts of the mountains which had a great influence on preserving it in outstanding condition. Some also reckon that Machu Picchu was found in 1876 and ever since was subsequently stolen away by a German entrepreneur Augusto Berns, who paid the then president of Peru to be able to smoothly run his businesses. Many scientists believe that the city was something like a holy place for the Incas, its localization so high in the mountains helped to conduct astronomical observations from which they drew their predictions.

To this day Sun Temple, Main Temple and the Temple of Three Windows located on the plan of a horseshoe are preserved, as well as the royal and princesses palaces, ritual bath, a prison, the Highest Priest House, the Holy Place with the great ritual stone Intihuatana designating the time of year. The whole is surrounded by curtains and fortresses. The main building material of most structures was clear granite and for the fortifications rocks and natural lay of the land were also used. It is clear that teraain, on which Machu Picchu was built, was used at most. In 2007, Machu Picchu entered the list of new wonders of the world.