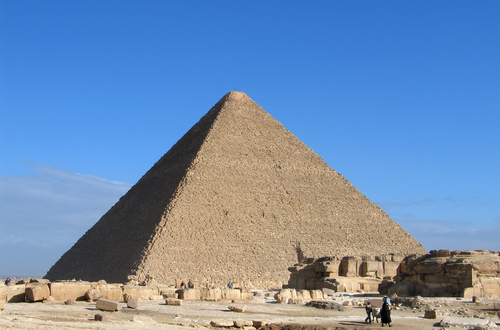 Listed among seven wonders of the world, the Pyramid of Cheops is the highest of the entire complex located in Giza. As for the ancient wonders of the world laid out by the Greeks, it is an object kept in the best form.
As it is well known pyramids in Egypt were built as temples, but mostly as tombs for the state deserving people, particularly the pharaohs. Cheops ruled Egypt around 2500 BC The pyramid is 137 meters high, which is about 10 meters less than that after construction, and its side are 230 meters, plus tens of centimeters on each side depending on the side of the world. Each side carefully points out to a different part of the world, and the entrance is located on the north wall.

The pyramids were built out of huge blocks of stone weighing two or three tons, that were piled up using only power of human hands and not too complicated tools. The pyramid of Cheops is created from 2.3 million stone blocks, and the construction lasted for decades. The construction of such massive tombs started immediately after the birth of another heir to the throne.

In the inside of the pyramid of Cheops there are rooms designed as tombs for both Pharaoh and his wife. There are also areas that were likely to serve as a place of burial, but were not finished. Everything is connected by a network of tunnels. There are also places and corridors built to confuse potential thieves. There is also a tunnel that was probably constructed by criminals. Traffic routes and facilities are found not only in the pyramid, but also beneath the surface. From the royal chamber, which is located almost in the center of the pyramid, go two tunnels – the outgoing channels on the outside, which exit holes are directed to the north and south. In the past, they were probably aimed at important to the Egyptians stars.