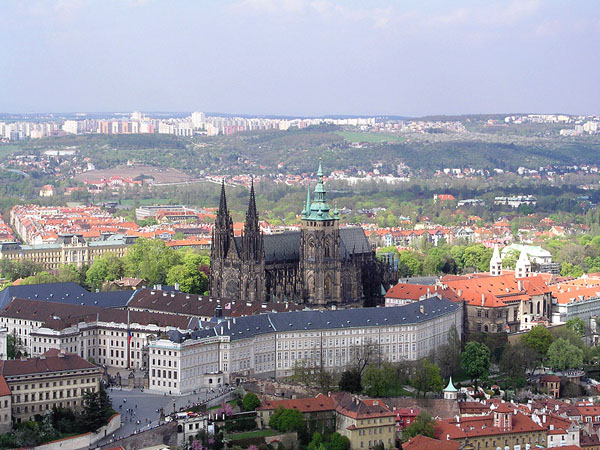 The history of Czech statehood, Polish alike, begins with the accession of both countries to the Christian European family. The Czechs were baptized in 831. In Prague, the first major building which appeared in today‘s castle was the church of the Virgin Marry surrounded by fortifications. The construction of first castle was started in the ninth century during the reign of Spitygniev the first. In tenth century church of St. George was built as well as the rotunda of St. Wit, which in the same century gained the status of the cathedral, and in St. George’s church nunnery was created. Even before the start of the new millennium, the Pious Bolesław II ordered the rebuilding of St. George’s into basilica, in which they began to bury the members of his dynasty.

During the reign of the first Czech king, the Prague castle waited to stone walls to be buitl with three gates, which defended the towers. At that time, St. Wit‘s Cathedral was destroyed and replaced by magnificent basilica. Roman-style building was 70 meters long and back then it was the largest religious building in the country. Church of Sts. George also lived to see the investment – two additional towers were built. During the reign of Spitygniev II, the wooden structure of the castel was being replaced by a brick one.

Over the next 200 years, when prevailing office was moved in Prague Castle, its intensive reconstruction began, but often in those times fires devoured the castle in 1303. The reconstruction began after 30 years. During the reign of Vladyslav IV, at the turn of the fourteenth and fifteenth century, the main part of the castle was completed and the construction of the next began. Additionally, in the castle emereged the chapel of All Saints, which after a few years was destroyed by antoher fire. On November 21st, 1344, King John of Luxembourg and the then Bishop of Prague launched the reconstruction of the basilica of St. Wit. Roman style was replaced by Gothic and the assumption of the ruler was to make this place even more sublime in order to create there a place of worship of St. Wenceslaus, so that the coronations of kings could take place there and so that this place could become the seat of the Archbishop.

South side of the cathedral received a new entrance in the form of the Golden Gate, wich facade shows scenes of the Last Judgement. In 1385 work was completed. Another major investment was began in the sixteenth century. Bell Tower was built in 1554, and during the reign of Vladyslav Jagiello also the mausoleum was built, and in the eighteenth century southern tower was topped with a late Baroque roof. Work on next aisles of the Cathedral started in the second half of the nineteenth century, and the whole building was put into service in 1929. Construction of the castle was suspended for many years after the death of Vladislav IV, mainly due to the ongoing wars. It was Vladislav Jagiello who took on the task of carrying on. Thanks to him, castle has gained south-west wing and a large hall named after Vladislav, which has dimensions of 62x16x13 meters, and its vault was finished in the Gothic style. Another wing of the castle was founded by Emperor Rudolf II Habsburg, then the Empress Maria Theresa not only did she build southern buildings but also she had to invest in repairs after a fire in 1757.